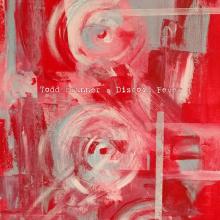 After a 14 year hiatus from recording music, Todd Brunner returns to knock some sense into his own head with this 4-song EP of concise pop nuggets. Straddling the themes of personal joy and existential dread, Todd mixes a delicious cocktail of musical styles that is both refreshing and intoxicating. While these songs may reflect an artist tentatively finding his way back into music, they also illustrate that Todd is an excellent bartender. Drink up!

"Todd understands pop music like no one else I know." - Art Bevilaqua, film composer

"I mainlined these four tracks for about three months, then went out and unsuccessfully tried to start a Todd Brunner tribute band." - Rupert von Nutwood, musician

"I was getting spanked in an S&M club when I first heard Discoid Fever. It had a lasting effect." - Howard Storkman Jr., musician