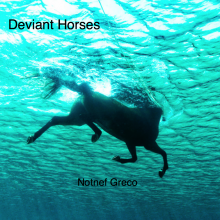 Notnef Greco have emerged with a bizarre EP woven around a pulsing pattern that sounds like an animal straining to breathe underwater. Perhaps this is what precipitated the rumor that they spent some years honing their chops in the mythical land of Atlantis. Deviant Fond and Count G cordially laugh the whole thing off, although they admit to the fact that they’re both attracted by such nonsense. “We did try once to build a recording device that ‘breathed’ underwater, so we could capture the sound from the ‘inside’, as it were” quips Deviant with a smile worthy of his name, while the Count dismisses the failure, in utmost seriousness, as “small stakes, considering the grand project ahead.” What that entails exactly remains enigmatic, but this first sample bursts forth with a beguiling range of listening experiences, alternately calming and somnambulant or frenzied and alarming, as if a weeping horse indeed decides to deal with its woes by going clubbing. Perhaps, we might want to follow these same galloping footsteps.