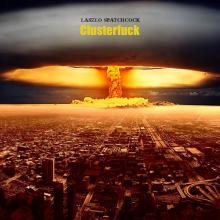 Here are two songs that we forced into existence in 2020, despite numerous obstacles. Hope you like them!

The best-laid plans ... We had just returned to playing live when the pandemic struck. The plan had been to gig as often as we could this year and compile a lot more live improvisational tracks. Then we would hit the studio in October to put together another album in the same fashion as "Nice Music for Morons".  None of that happened.

In July, frustrated and bored, I assembled all of us 'Cocks for a Zoom chat. It was a Happy Hour thing and we all had our requisite drinks and whatnot. During this jolly chat, we decided to try to work online on some music so that we didn't all lose our minds. Each of us had one thing that we had been working on by ourselves. We figured we could do a four-song EP by expanding each of those ideas "together".

I will spare you the technical details of the process, except to say that it was not without mishap. We consolidated a lot of our ideas so that we ended up with two songs instead of four. Quality over quantity, right? A rockin' teenage single reflecting the batshit times we now live in. Well, we think so.

To top it off we had our pal and local hero, The Shimmering Lungfish Orchestra, do strings and a tiny bit of brass from the safety of her closet studio. I  was in charge of overall production and mixing, getting input on each mix attempt by the other band members until we got it right.

All in all, we successfully navigated the logistics of recording some music during a pandemic and nobody dying of Covid. Result! It wasn't too arduous. Who knows, we may do it again.

Written by Laszlo Spatchcock. Recorded at our separate homes. Produced and mixed by Chris Christ. Cover by Atticus Grafficas.