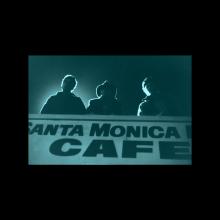 A crazy excursion into free improvisational music, recorded on ultra cheap equipment in a living room and originally pressed as a limited edition LP of 500 copies. Dudes on Drugs was distributed at gigs, art exhibitions and on the street as part of an avant garde music festival in Los Angeles, summer 1982. There was enough interest in the record (at bargain price) to quickly exhaust the 500 copies, but sadly not enough to spearhead an LA improvisational music scene, as the boys had hoped. Much to their surprise, there was even continuing demand for the record, but none of the three could afford to press any more copies, so Dudes on Drugs disappeared into obscurity (where it probably belonged).

In 1987 when Todd Brunner emigrated to England, he took with him two boxes of tapes which he thought contained the master of Dudes on Drugs. It turned out that the tape was not in either of the boxes, but instead in the basement of a friend in LA who had "borrowed" it one night without telling anyone. Unfortunately we did not discover this fact until 2015, years after thinking the tape had been mysteriously lost forever.

By way of subterfuge that shall remain secret, we managed to acquire the tape, find an old two track 1/4 inch tape machine and make a transfer to digital. And here you have the result, not heard since 1982, in all its noisy madness, the original Dudes on Drugs. (Btw it's OK if you don't like it. Lots of people don't.)

You can download the album in MP3 or FLAC format below.