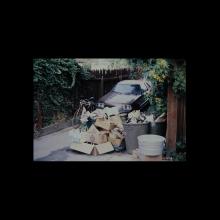 New unearthed tracks from the original 1982 DoD sessions. If you liked the first DoD record you'll probably like this one too. And if you didn't like the first one, you may like this one more. Or you may hate them both equally. But if you are a fan of wild free improvisation, this may be be right up your alley.

So how and why a new DoD album after 30+ years? Well, by complete accident we located some of the original cassette tapes that the DoD sessions were recorded on. These contained material that was not on the first album and that we thought might be palatable to fans of that record. So, after lots of assembling and mastering, here we are. This will be the last DoD release.

We have also included, in the attached album info, an entire history of the Dudes on Drugs project, including the making of this album. Please take the time to read it if you are interested. Otherwise, kick out the jams motherfuckers!

You can download the album, including album info, in MP3 or 24 bit FLAC format below.