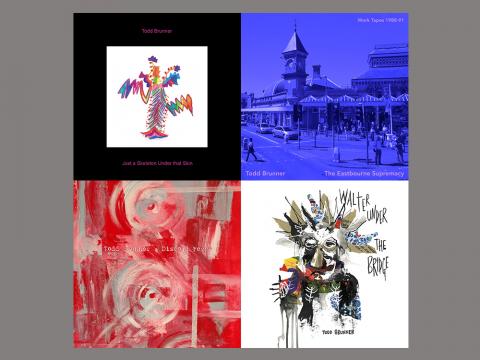 General information, recording info, liner notes, personnel and other trivia from my recorded output up to 2017. This is part 2.

During the second half of the 90s I gave up recording in order to concentrate on playing live. During this time I accumulated a great deal of material, mostly of songs written for my band, Uncle Twylyte, but also some undeveloped pieces from the early 90s. In early 2000, after playing a depressing gig to yet another indifferent pub audience of six people, I decided enough was enough with the live thing. Nine months later I began recording this record. It is a mix of both re-arranged live material and other songs that had been "piling up" for a few years. Because most of the songs were originally live songs, I called upon the considerable talents of Guy and Steve, the drummer and bass player from Uncle Twylyte, to provide the rhythm tracks.

Unfortunately, due to a series of stressful events, including me quitting music entirely for nine years, the master Cubase files for this album were lost and the only existing stereo master had very poor sound and was possibly even damaged. That, sadly, is what you hear on this release. It is what it is.

None of this music has ever been heard by anyone other than myself prior to this release in 2014. Some of these tracks however, may have appeared on other releases in a completely different form.

These were work-in-progress tunes at the time of recording, circa 1988-94. They are songs that were never finished or properly arranged, or earlier versions of tracks that eventually became something else. There are also some pieces that were completed, but that I didn't think worthy of releasing at the time. In any case, all of these recordings are rough mixes intended for my personal use only, in reviewing the material for future work.

Because of the above, the guitar parts are mostly first takes, recorded live as the tracks were being dubbed down to cassette tape for my future scrutiny. This is why some of the guitar is very questionable. But after decades of distance and perspective, I decided to release the material "warts and all" rather than see some of my best songs disappear into complete obscurity.

All of the songs were transferred from cassette tapes to digital in the early 90s, and then archived until 2014. At that time I cleaned them up and remastered them for this release. Download the Album Info on the album page for more trivial facts about this release.

Lured back into music after a nine year hiatus, and inspired by the work I had done recovering and restoring unreleased material on the archival release, The Eastbourne Supremacy, I returned to the simple song format with my first new music since 2002.

With sparse arrangements and a largely acoustic sound, Discoid Fever abandons the dense instrumental landscapes that had characterised a lot of my previous work. This was my way of wading back into recording and finding my new legs.

Most of the songs here were already partially written during the time of recording Discoid Fever. Once that record was complete, I immediately turned my attention to finishing up writing these songs, the idea being to follow up Discoid with another release very quickly. I'd had a long hiatus from music, and now knew I was back for good, so I saw no reason to waste any time!

The focus of Walter Under the Bridge is much more refined than the previous release, due to the songs all being written at roughly the same time. This is how I like to work. The lyrics here are both more personal and more cynical, capturing a short, specific period of my life in coherent musical form. I'm very pleased with this record.

The exception to the writing process was the song "In Your Face" which was originally started way back in 2002 with different music and largely different lyrics. This song stumbled around compositionally for the next 10 years in many different versions until finally landing as the one you hear now in 2012. Ironically, at this time I was not at all sure that I would be returning to a life as a musician, and I rarely played guitar, so the fact that this (or any) song popped out is a bit of a miracle. But despite its being written five years previous, the lyrics and mood of the song fit so well with the others on Walter that I decided to arrange and record it for the record. I'm glad I did.

We, the collective artists at Sublamental, prefer to spend our time making music rather than getting into arguments on Twitter or lowering our IQs on TikTok. Therefore we are usually only on social media platforms to promote new releases and/or news. We are not there to have conversations. If you want to TALK to us, use the Contact form here and say hello. We always respond to non-spam messages! If you want to HEAR from us, sign up for the Newsletter and we'll keep you informed of what's going on, as soon as we know ourselves.