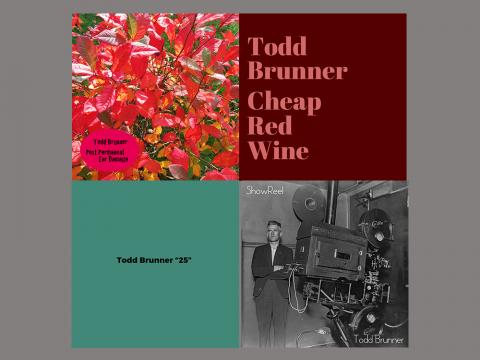 General information, recording info, liner notes, personnel and other trivia from my recorded output up to 2017. This is part 1.

Larry Rott - Bass on Cast Me Away
Todd Brunner - Everything Else

There is not much more to say about this record than what is already on the album page. Most of it was written and recorded in a one room house that my wife and I shared in Malibu, California between 1985 and 1987. This period was simply an outpouring of literally every idea I had ever had prior to actually owning any recording equipment.

At that time I was still entartaining the bizarre idea that I could have a career in music, although absolutely nothing in this collection of songs would indicate that. I was young, and while not necessarily naive to the nature of the music industry, I was very naive to the nature of business. I truly believed that talent would conquer all. It almost never does. I also thought that variety of material was a virtue. It almost never is.

These songs are part of a very large number of pieces I was working on between 1988-94, and represent my shift from lyrical material to entirely instrumental. Most of the songs on 25 also saw their beginning during this period, as well as lots of bits and pieces that ended up on ShowReel and eventually The Eastbourne Supremacy. This however was the first release of material recorded during this period.

The cover of Bacharach/David's The Look of Love came about through my obsessive affection for Bacharach's scores for the 1960's film classics What's New Pussycat?, Casino Royale and After The Fox. There is even a sample of Peter Sellers from the latter film in the song. I make no excuses, not even for changing some notes in the chorus to sound a bit darker than Burt would probably have approved of, and adding a tag of my own to the end.

Some more instrumentals from the early 90s. Most of these were in progress well before the release of Cheap Red Wine two years previous. What got finished first got released first. And some things never got released at all.

On this material I stepped back a bit from the the full MIDI onslaught and explored more acoustic treatments on a few pieces. I'm sure that I remember using a guitar case as a bass drum and an electric heater as a snare drum somewhere on the songs.

You can also hear my love of Frank Zappa in the guitar solos throughout and in the marimba arrangement on Tight Mr White. I make no apologies. Frank was one of my biggest influences as a guitar player, musician and human being.

Not much to say about this one that isn't on the album page either. At the time that I put these montages together, I had resigned myself to the fact that none of the material that later appeared on The Eastbourne Supremacy would ever be released, so I made sure to include snippets of all of it here. If you listen carefully you can hear part of every single song (except the single vocal number) on that record spread out over these montage pieces.

This record also marks the only time I have ever used ProTools, upon which this entire project was done. At this time, Cubase, which I had used since version 1 on the Atari ST, could only handle MIDI, and no audio! I liked ProTools, but once Cubase soon after integrated the same audio features, I went back to my old friend and we have remained together ever since.