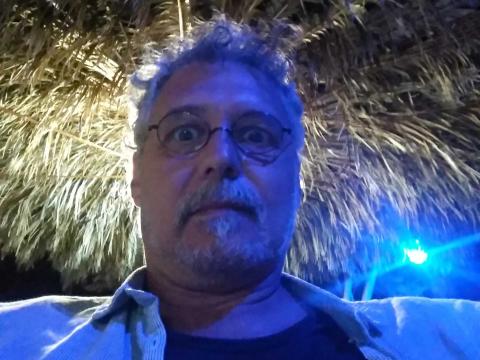 Hi kids. We are pleased to announce the first release of a new Sublamental artist, Masking Tapeworm! It's a relentless four song EP of infectious dance grooves and mad textures that we think you Sublamites are really going to like. That's certainly what Count G thought when he discovered Masking Tapeworm on a small island in the Aegean while on holiday, and quickly whisked him into the studio to record these little gems.

The above picture of Count G is a selfie taken during the sessions. Masking Tapeworm himself is a bit camera shy.

Apart from that delicious release we continue to toil on with various projects that at some point will see the light of day. First up is the Laszlo Spatchcock album, "Nice Music for Morons", coming your way in the autumn. I've heard some of it and it's very special, and utterly indescribable. You're going to like it! And then there are new artists Cyanide Slugs, The Nightshade Family and The Larry Flynts, who are all working on stuff at various paces. It's difficult to forecast when these releases will drop, but we'll certainly let you know when we've pinned them down. And there should be new music from Todd Brunner, Count G and Notnef Greco also coming next year.

Having said all of the above, things change here at Sublamental about as quickly as the UK changes governments, so you never really know what might pop out unexpectedly. Keep watching this space!

We, the collective artists at Sublamental, prefer to spend our time making music rather than getting into arguments on Twitter or lowering our IQs on TikTok. Therefore we are usually only on social media platforms to promote new releases and/or news. We are not there to have conversations. If you want to TALK to us, use the Contact form here and say hello. We always respond to non-spam messages! If you want to HEAR from us, sign up for the Newsletter and we'll keep you informed of what's going on, as soon as we know ourselves.