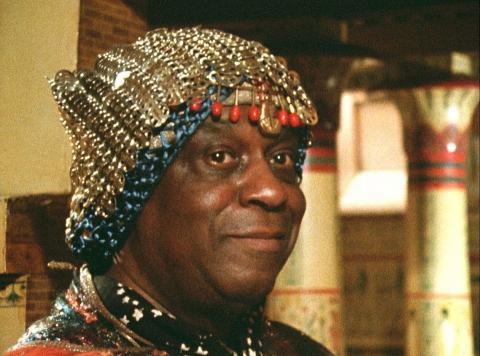 Hello! It's been a long time since anyone here at Sublamental has made much noise, musically or otherwise. I don't think I need to bore you with details of how we all grapple with the strange world we live in. This we all do in our own way. Suffice to say we've all been too busy to think about music, and that aint good!

So, in the spirit of getting back on track, I'd like to tell you about some new releases coming up in the near future. (Also I am providing some visual entertainment in the form of a photograph of Sun Ra, just because. You're welcome.)

First up we have a brand new album from Dudes on Drugs! And by new I mean really fucking old, culled from the same sessions as the legendary 1982 classic. That's right, we went back to the original session tapes to see if there was anything remotely listenable that we had not included on the original album, and look what happened: a whole new album entitled "Cabaret Rustique" miraculously appeared. Fans of Dudes on Drugs 1, rejoice! Haters skip to the next paragraph. "Cabaret Rustique" is coming very soon.

In early 2019 you can look forward to a new mini album from me. It's called "Cloud Control", and it has six songs just like the previous two. I'm a creature of habit.

Two new artists are joining the Sublamental roster next year!

The first of these is thrashcore power trio, Cyanide Slugs, whose massive sonic assault belies their size. The Slugs will be hitting us with their very first (as yet untitled) EP some time in the first half of the year. We really like these guys and hope you do too.

Next are improvisational collage artists, Laszlo Spatchcock, who weave a bizarre mix of live and studio performances into a somehow cohesive and strangely rhythmic stew. This is a truly original band of the sort that we absolutely lose our shit over here at Sublamental! Expect a stunning album from them, entitled (no joke) "My Balls Must Not be Kicked or Thrown Against this Wall", also in the first half of the year.

Rumour also has it that Count G, the hardest working man in show biz, is toiling away on some new material and a new direction, while against all odds, fresh Notnef Greco material may be closer than anyone thinks! Stay tuned!

Have fun doing whatever you do at the end of the year.