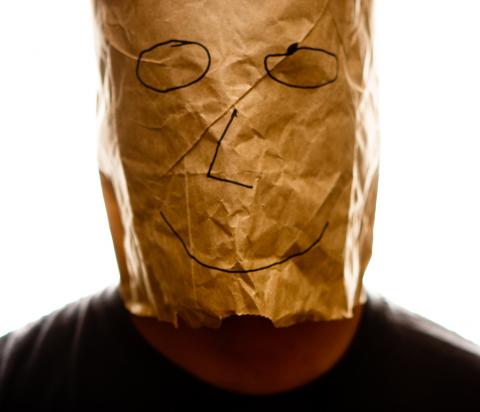 So the other night I was in the pub with Aubergina, Todd Brunner and Rupert von Nutwood and I recorded part of our conversation on my phone because I thought we were saying some brilliant and hilarious stuff. Not surprisingly, said stuff was neither brilliant nor hilarious when listened to sober the next day. But amidst this mess of juvenile babbling I captured this brief discussion of Laszlo Spatchcock and the recording of Nice Music for Morons, which I thought might actually be of interest to fans. So the following is a transcript of that bit of the conversation. (The picture above, a self portrait, was provided by Rupert.)

Aubergina Cucumbas: So there was that week when Jake and I ran into all of you at Coco's one night, and then all of you again the next night at The Western.

Rupert von Nutwood: Yeah that was our schedule for the whole album. We totally worked sensible hours, like a normal job. We'd get to the studio at like 8:30 and start recording promptly at 9:00. Then we'd break for lunch, eat our sandwiches and shit that we'd brought and chill for an hour, then back to work. And then we'd knock off at 5:30 - 6:00 and go directly to either Coco's or The Western. All of us together, like a bunch of teenagers. And we did this every day we recorded, which was a good portion of the summer.

Todd Brunner: And most nights we would end up eating at one of those places simply because we were too tired to move. All that boundless creativity takes it out of you! And sometimes mostly out of tiredness we'd end up staying until late, even closing, before staggering home. Truly we were numb, and it wasn't just alcohol. But I'll take the blame for sensible schedule, because I like to work in the daytime, and I booked all the studio time! Ha!

AC: You said that week that you were working on a song dedicated to Jamestown. This must have been "Anodyne Gurning in Jamestown".

Phil Lickman: That's my favourite track on the album.

RvN: Thanks dude. Yeah that must have been in August sometime. Mary came up with the title. We all loved the paradoxical nature of the statement. It's kind of hard to gurn in an anodyne way. I love shit like that. And the studio is right in the middle of Jamestown, so for days we were all trying to gurn in an anodyne way as we were coming and going. It became a running joke during the sessions, with all of us pulling hideous faces.

PL: What is gurning anyway?

AC: It's when you pull a hideous face.

PL: Ah, finally I get the joke.

RvN: Thanks Gina. We're happy with it. And I actually liked the regular sensible hours, once Todd kicked me up the backside a few times. Chris and RB (Rosemary's Baby) are night owls though so they didn't fancy the early rising part, but Mary was cool with it. Overall the sessions were good and the recording and mixing of the album as a whole was a very positive experience for all of us. Even the night owls.

TB: That's because we bonded as a team, working on a project together. We spent all of our time together, even when we weren't in the studio, because we were too exhausted to do anything else. So all of our social lives pretty much disappeared for the duration of the process. This of course is the kind of thing that destroys bands, but for some reason it had the opposite effect on you lot. It brought you closer together. And it was fun to be part of all that. It was a good summer.

RvN: Sure, because we had never worked together so intensely on a project before. Really we had never created anything together apart from improvisation in a live setting. I mean Motion/Lotion was literally the first time we had ever written and recorded an actual song as a band. And that was just done at Chris's house over a few weekends. Very casual. So actually booking a studio and going in to record an album was really new.

TB: Totally. I mean, you guys had never even rehearsed before. When you were playing live you would just show up to the gig and improvise. So doing something structured probably made you feel like a real band for the first time.

RvN: I guess it did. Bonding for the first time after being together for years. Haha! What a bunch of tossers!

TB: I knew you could do it though. From the first time I saw you play at The Factory a few years ago, I knew you were all good at making shit up. And that's what music is all about really.

RvN: Well honestly, you having faith in us and wanting to produce was why we agreed to the project to in the first place. Without you pushing it, we probably would have procrastinated. And of course it was you who planted the idea that we should record an album in the first place.

AC: How did you go about composing in the studio, considering that you'd hardly done it before?

RvN: Well the process for Morons was pretty much the same as for Motion/Lotion. Every song is basically just one riff with the arrangements changing over it. That's our jam really. One riff, lot's of arrangement. With Morons the riffs were determined by the live improvised segments, once we'd found the parts we wanted to use. So we had to match the tempo, the key and sometimes the bass line of the live stuff, which was a bit challenging. But once we got that down we just played off of each other to come up with the arrangements.

PL: Who plays what?

RvN: Oh of course, you've never seen us live because you moved here after we stopped gigging. Well for live it was always me on guitar, Chris on bass, Mary on keyboards and violin and RB on drums. But all of us play other instruments, and some of us each others. In fact, at our very last gig we all traded instruments for a couple of songs. It sounded shit, but by then we didn't really care. So who played what on the album is not so straightforward, same with the single. It was just a matter of who felt like playing what at a given time.

PL: Why did you stop playing live?

RvN: It was never intended to be a permanent thing. We just got tired of it, because when you are improvising, people tend to have a shorter attention span than they would for a band playing songs. Particularly at someplace like Coco's where people are more interested in drinking, chatting and eating than listening to the music. Even at The Factory, which is an experimental music venue, we'd lose the attention of the audience. And at the start we really liked being the background ambience in places because it meant we could do whatever the fuck we wanted. But after a while you start to question why you're bothering to do it, when you could be doing something else. So we decided to do something else. Also there was always some drunkard spilling sticky beverages on us and our gear while we played, so there was that kind of motivation as well. But now that we've made an album we're pretty proud of, we may start playing some gigs again. We've already talked about it.