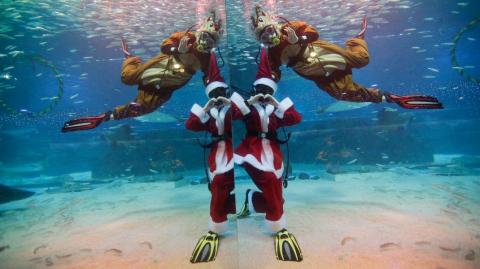 Just a seasonal greeting from us to you, in lieu of any surprise festive Xmas single or album releases, which we haven't got. And it's also an excuse to publish this fine pic of Notnef Greco in full seasonal regalia, which we have now done.

But we'll leave you with just a bit of quick news before we get back to our gin rickeys and truggery:

All is on course for my new record "Cloud Control" in the first part of the year. Recording is going well and I'm very pleased so far.

Count G is working on some astonishing new stuff in a new direction, some of which I've heard, and it's amazing! No time frame on this one, but the Count has been known to deliver surprise releases when you least expect it!

Laszlo Spatchcock are hard at work on their first album for Sublamental, assembling tracks from live and studio improvisations. Sort of the way Miles Davis did, except definitely NOT Miles.

And our other newcomers, Cyanide Slugs are so busy pretending to tour the UK and Europe (while that's still possible) in a beat up van and a retired London taxi, that we have yet to be able to get them into the studio to record a three or four song EP for us. But this will happen eventually.

We also hope you checked out and enjoyed our two most recent releases, the fabulous new Notnef Greco album, The Demo Tapes, and the archival release from Dudes on Drugs, Cabaret Rustique. If not, why not unwind at the end of the year with one of these in your ears, and a flagon of ale in your hand?

See you all next year!