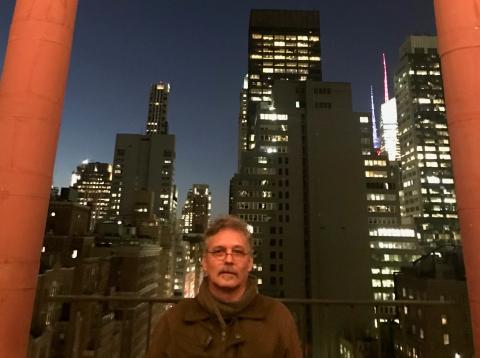 Dr. Harrison met Count G at his apartment in Manhattan, a classic 1910 building with a coach entrance and a view of Riverside Park. Shades of The Marvelous Mrs. Maisel, who must have grown up around the corner.

The doctor later confided to Sublamental that, as he was going up on the elevator, he felt that he could have been on his way to one of those parties he used to host in Hollywood in the early days of his toy business. But this time he was driven by a new preoccupation: talking to maverick experimental musicians who operate outside the music industry.

He found Count G to be his kind of person and was stunned to discover that they’d had a significant share of similar acquaintances.

Dr. Harrison: Thank you for making the time. It’s lovely to meet you.

Count G: Well, the honor is mine. I had the pleasure of listening to you being interviewed in the legendary “Bits and Pieces”. I’m quite amused to be on the other side of the equation.

Dr. H: How on earth did you know about “Bits and Pieces”? I mean, that’s a real Hollywood thing.

CG: Well, to begin with, I was born in Hollywood – not that this qualifies me for anything at all… Actually, I’m very well connected with the brains behind this show – but don’t ask me to reveal more details.

Dr. H: Oh… is this of sensitive nature?

Dr. H: OK, I’ll let it be. Still, may I ask: is Hollywood, or the LA world more generally, something you care about? Or are you one of those snob Manhattanites?

CG: Oh, not at all. The LA world will always be precious to me. After all, my experiments with music began there – way back, in ancient times of reckless youth. And New York is currently my home, but all that is transient. I have no home really, although I guess Athens is my home, if only because I was a happy child there once. And since I do everything in my power to remain a child, I guess that’s the matrix. But in essence, continuous movement, travelling to strange places, and generally being out in the streets is where I feel most at home.

Dr. H: Would you say that’s pertinent to your music?

CG: Absolutely! First of all, since I’m not at all a trained musician, music for me is a profoundly interactive space. A space of improvisation and encounter. A space of chance in many ways. Which is why I think “being in the streets” – as a sort of vagrant – is a rather apt metaphor for what I do artistically.

Dr. H: Hence, your new record Music for Street Rumor is a kind of tribute…

CG: Tribute to the many environments that host me in their midst – yes. I’ve always been attracted to the sound ambience around me – the sound created by humans and their bizarre creatures, most of which are mechanical and make fabulous noises. But also, human voices themselves – especially in languages I don’t understand. I remember being awed by this while under the influence of psychedelic mushrooms one sultry summer evening in Amsterdam. It was a real discovery. And surely, the sounds of all of nature’s creatures, of natural processes like heat making wood crackle – sounds from any source.

Dr. H: So, you find drug use enabling in your work, in your life?

CG: Yes, definitely, but we are not going to discuss the details of that. I might get arrested (laughter)… No, seriously, it’s not a simple matter – you have to wait for the article I mean to write on this subject.

Dr. H: I can wait; I have a donkey’s patience… It comes with being a doctor.

Dr. H: Do you feel Street Rumor is a departure for you?

CG: Possibly. Not easy for me to say. Others will judge this, one way or another. There are some different things I do here, apart from turning found sounds into notation and orchestrating it in different ways. I’ve been experimenting with writing music note by note, which I can only do with MIDI since I don’t know notation. These are short parts inserted here and there: the brass march in “Abandoned”, the string trio in “Dragonfly” or the strange quartet in the middle of “Fish Voices”. And there is a lot more improvised playing than before, including the peculiar use of piano improvisations, which were recorded in Hollywood in fact and I use them as found sound.

Dr. H: So, you still think in improvisational terms.

CG: Absolutely! I wish I could do more of that. Electronic music is still a process of discovery for me, both technically and creatively. It’s a lonely process, especially since improvisation remains my default creative mode (in everything, not just music), and at this point in my life I lack the opportunities to play off of what other musicians are doing in real time. The Notnef Greco project is an attempt to rectify that, but it is still marred by long distance exchange.

Dr. H: I admit I can’t get my head around the Notnef Greco project. This whole underwater thing, the punishingly long drones, the outrageous guitar… I mean, a whole 13-minute piece entirely made of electric guitar?

CG: Yes, “Polar Delays” – a brilliant piece of music, my favorite. But look, it’s OK you find it weird. Most people can’t quite relate to its bizarre playfulness. Nor to its luddite, lo-fi character. It’s rather deviant – as my dear underwater partner likes to call himself. But a great source of pleasure for us.

Dr. H: You must have worked on that while also working on Street Rumor – that’s what it seems like.

CG: I always work on multiple projects at once. I’ve been writing three books in the last ten years, all on different subjects. I have two books of poems that I started in the late ‘90s – I don’t consider them ready for publication. They’re still growing. I’ve always worked that way. I get tired of intense concentration, and my tendency is always to fly away from the thing at hand. I love discovery and experimentation most of all.

Dr. H: Isn’t this debilitating? Isn’t there too much distraction in what you’re describing?

CG: Yes, major danger of distraction. And I succumb to it. But what saves me from just wasting time is my drive to create an architecture around a work. So, I use the variety of occasional excursions to create a world for them. And then, it’s exciting to be building many worlds together at once. No matter how long it takes.

Dr. H: Well, in my business that’s not an option… Is music linked to your poetry?

CG: It’s the reverse. Poetry is a musical art – it was so from the earliest societies on this planet. Poetic language is driven more by sound and rhythm than by trying to say something in a conventional sense. Musical composition made me realize that this is what I have been doing in writing this entire time. A very exciting discovery!

Dr. H: And I presume it’s this similar tendency that made you think of random sound environments in musical terms.

CG: I guess so, yes. At some point, I discovered the poetry of people’s inadvertent sound-making. And I let this guide me into musical composition. In turn, this has spurred me on to making up poems out of the blue, improvising verses out loud, in the streets or in strange places and instantly recording them. One feeds the other. I turn myself into found sound.

Dr. H: You’re like some giant sea-beast, swallowing waves of sound, filtering it, and spewing it back out!

CG: If you say so. Who knows, maybe I’ll take one of Dr. Harrison’s nasty podcast talks one day and turn that into music!

CG: Ah, he was this notorious dark-bearded figure who used to roam the Venice Boardwalk on roller skates back in the ’80s. He used to play a cheap electric guitar twanging from a tiny amp he had draping over his shoulders, like a backpack. He would wrap his full head of hair in a turban tied with woolwire. Quite a figure. But I don’t think his name was Sergio.

CG: Ha! Otto was my German car mechanic. Man, did he know his BMWs! But he was tough and didn’t like too much bantering. He would ban from his shop any car owner who got under his hair with questions about the work on the engines and stuff. That’s when I began to mock him by calling him Otto Ban, which sort of rhymes with Autobahn, if you know what I mean. (Laughter). I was always amazed that he took the joke without punching me in the face. I started writing an oratorio in tribute to him, but then I left LA and it never got done, except for these two pieces I re-recorded and included in Stains.

CG: What about it. It’s kind of underground, is that what you mean?

CG: Yes, it’s a group of people who share a lot of things they love – about music and art of course, but mostly about life. Making art for us is really just living – and sharing this love for living. It’s a healthy way to deal with this idiotic world. We pooled our resources and created a space and a label to collect our musical endeavors, which are quite different but share this common spirit. We’re finding more and more kindred souls to collaborate with – you’ll hear some brilliant new releases very soon.

Dr. H: Indeed, I’m looking forward to it. Thanks for the visit. I hope to see you back in Hollywood sometime.