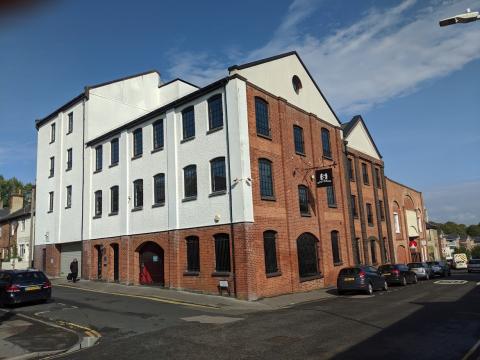 Stop the presses! (Is that still a thing? I always wanted to say that.) There are brand new mixes of Todd Brunner's Cloud Control album, and they are stunning! Now, as you may know I am a huge fan of this album, and will usually flap off my mouth about it until someone tells me to stop, so it carries no small amount of gravitas when I say: It's like a completely different album! And I mean that in an ever so good way! It's like the real album had been hiding under a blanket of mediocrity and suddenly decided to rise up and greet the world.

What happened is this: Todd acquired a new pair of pro headphones and was revisiting some of his old material to see how it sounded. When he got to Cloud Control it sounded markedly worse than anything else. "I was shocked," he told me. "This was supposed to be my finest work and it sounded like shit. How could I have possibly mixed it like that?" The truth is that Todd was under a lot of stress at the end of the Cloud Control sessions, and undoubtedly had severe ear fatigue and loss of objectivity. "What I should have done was stop once the tracking was completed, take at least a month break, and then come back fresh with more perspective." Instead he went straight to mixing in order to finish the project, get it behind him and move on to something else. "It's not that I wasn't proud of the album, it's just that it took a lot out of me and I just needed a break. I should have taken it."

Horrified at the sound of the mixes, Todd contacted producer The Undertaker (who had not been involved in the original mixes), and along with his engineer, Vargas, they made their way to The Factory Floor studio in Lushwood Hills (pictured above) to remix the album. "It went really fast," Todd recalls. "It was painfully obvious what was wrong and what needed to be done. We did the whole record in two sessions, and all three of us were over the moon with the results. This is what it should have sounded like in the first place."

So there you have it. I cannot stress strongly enough how much of an improvement this is. The album is punchier and tighter, yet it has a lot more air and much better stereo separation. The muddiness is gone and the album really sings! And hell, I liked it before! Check it out now!

We believe, as do many others, that social media is directly responsible for a lot that is wrong with the world today. What started life as well-intentioned social tools have now become the largest and most successful propaganda machines the world has ever known. These platforms have enabled and powered the crumbling of democracy and the disintegration of morality, human decency and critical thought. They have plunged our world into a sickness far worse than Covid-19. As our response, Sublamental has abandoned our Instagram account and will only post news of new releases on Facebook and Twitter. Nothing else. We will not engage in conversations on these platforms. If you wish to speak to us use the Contact form and/or subscribe to our newsletter. Stay safe (in all ways).