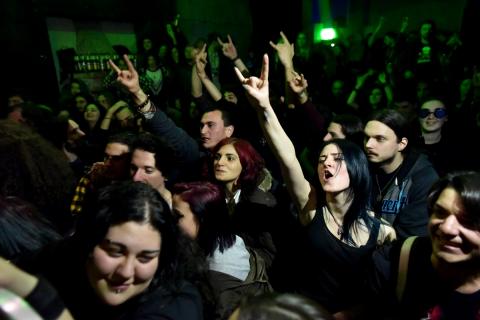 On the occasion of the release of Cyanide Slugs's long-awaited first album, The Distraction Effect, I thought I'd present a brief history of the band for the uninitiated. So let's go!

Cyanide Slugs started out as the most notorious punk band in the Southeast of England, terrorising the countryside with their wild stage antics and songs of defiance and disdain. Led by vocalist/guitarist Cassandra Castle, they cut a swathe through the club and pub scene between 2013 and 2016 until there was hardly any venue left that had not banned them. Joining Castle were guitarist Tony Roko, bassist Catriona Flamenghi and drummer, Howard Storkman Jr. Together they created a wall of sound that was both overwhelming and cathartic, but it was Castle's outrageous performances that ignited crowds into riotous mayhem. They definitely shocked this young girl's senses to the point of electrocution.

Castle was known to strip completely naked on stage and perform entire sets in such state, while waving sex toys in the air and sometimes inserting them while continuing to perform. Another of her trademarks was grabbing audience member's beers, dowsing her body with them and then handing the empty glasses back to the punters. At least once per gig, she would pull an audience member on to the stage, force them onto their hands and knees and ride them like a stallion for the duration of a song. I had the "pleasure" of being this mount at one gig, while my friend Jack, on another occasion, was the recipient of attempted sodomy through his jeans with a large dildo.  It was primarily these shenanigans that got them banned from many venues (not to mention several arrests), while simultaneously garnering them a passionate and faithful following all over the Southeast. I was proudly one of the faithful!

And behind Castle's wild antics the band laid down a visceral wall of incandescent high energy rock n' roll that simultaneously begged you to rush the stage, while slamming you against the back wall of the club with its power. I can tell you first hand that this was a singular experience at the time. Nobody else had that kind of power. No one else played with that conviction. No other band was that good. It was almost like the four of them were one individual will, exerting its dominance over the weaker minds of the helpless audience.

It should be noted that Cyanide Slugs was strictly a live band. There are no recordings of them in this incarnation, other than poor-quality bootlegs from a number of gigs. As Cat told me recently, "We just never got around to recording. It wasn't important. It was all about the live show and how much impact we could make at every gig. We were always trying to top ourselves and it was always exciting. At that time, recording our songs just seemed like a boring idea to us."

Alas, the party ended suddenly when Castle discovered she was pregnant and decided she wanted to have the baby and settle down with the child's father. She promptly quit the band, moved to Norfolk and lives there to this day, happily mothering. Meanwhile the rest of the band, having lost their main songwriter, front person and only vocalist, was aimless, deflated and depressed, having no idea whether to try to keep going or pack it all in. Considering what I've said above, you can understand why this was a very big deal. It wasn't like losing a singer, it was like chopping off a limb.

In an effort to remain positive, and because they had fuck-all other prospects, the three remaining members moved to Lushwood Hills with a plan to continue pursuing music together somehow. The exact reasoning behind this is unclear, but Cat told me recently that it was because her sister lived in town and had a basement flat they could all crash in. But also, I conjecture, it was because of the rich Lushwood Hills musical scene, which offered options that other places didn't.

Once here they met Todd Brunner and entered into the local music scene. For a couple of years they toyed with a few ideas that didn't gel (including a band with me as singer), until Todd suggested that he join the band and that they resurrect the Cyanide Slugs name and record some songs in a completely different direction. And by "different" he meant anything goes! Having resided in Lushwood Hills for some time, the band had acclimatised to the "melting pot" nature of the local scene and was receptive to this idea.

The new album, The Distraction Effect, equally showcases the band in adapting Todd's lyrical pieces and also group-composing and arranging instrumental tunes. It is a deep, rich, colourful, quirky and fun collection that defies the history of the band, while both embracing and surpassing it. I count myself lucky to have experienced Cyanide Slugs in both versions and to have become good friends with the band, particularly Cat. I am a big fan of this new record. You should check it out without hesitation!

Top photo: Me, in the foreground to the left, at The Forum, Tunbridge Wells, 2015, as Cyanide Slugs are hitting the stage. The opening act was local band, Andrex, who most people were there to see. CS blew them off the stage. (BTW, in searching through my old pics, I could not find a single one of the band. This isn't surprising. Unlike many of my contemporaries, I had better things to do at gigs than take fucking pictures!